Total U.S. rail carloads fell 7.3% (73,058 carloads) in February 2020 from February 2019, their 13th straight decline, but the decline disappears if you take away coal and grain (whose carloads tend to rise or fall for reasons that have little to do with the state of the economy).
...
U.S. intermodal originations fell 8.9% (96,897 units) in February 2020 and 7.0% (167,978 units) in the first two months of 2020. Around half of U.S. intermodal comes from international trade. Supply chain disruptions related to the coronavirus outbreak may have played some unquantifiable role in February’s decline, but intermodal has been falling for more than a year, so more is going on, including economic uncertainty and trade frictions that pre-date the virus.
emphasis added 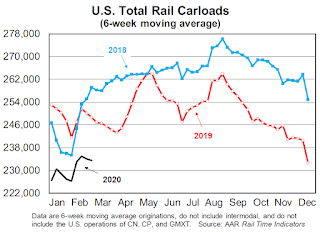 Coal bears most of the blame. Carloads of coal in February were down 67,770 carloads, or 21.1%, their biggest percentage decline since mid-2016. 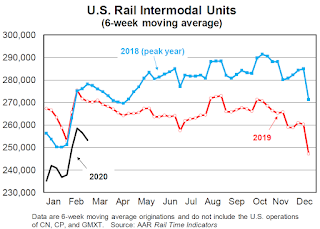 
U.S. intermodal originations were down 8.9%, or 96,897 containers and trailers, in February 2020, their 13th straight decline. Weekly average originations in February 2020 were 249,421, the lowest for February since 2015. Year-to-date volume through February was down 7.0%, or 167,978 units. If, as the American Association of Port Authorities recently suggested, cargo volumes at many U.S. ports will fall by 20% or more in Q1 2020 from Q1 2019 because of the coronavirus, it might be a while before U.S. intermodal volumes move back into growth mode.