A few Comments on Weekly and Continued Unemployment Claims

On Thursday, the Department of Labor will release Unemployment Insurance Weekly Claims.   The consensus is initial claims will increase to 750,000, but that is way too low.

Based on early reporting from various states, initial weekly claims will probably be several million this week.

The all time high for initial weekly unemployment claims, Seasonally Adjusted, was 695,000 in Oct 82. The high during the great recession was 665,000 in Mar 09.

The previous record will be obliterated this week due to the sudden economic stop.

The extremely high level of claims will probably continue for several weeks.    But it will be important to track Continued Claims too - since many of these people won't be returning to work for some time. 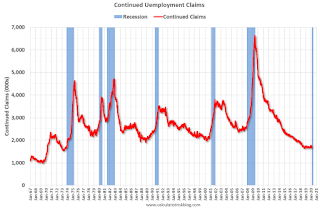 Here is a graph of continued claims since 1967.

If we look at Hurricane Katrina in 2005, weekly claims jumped up immediately, and then declined fairly quickly back to normal levels - but continued claims stayed high for a few months (since it took some time for people in New Orleans and along the Gulf coast to return to work).

This pandemic sudden stop is like Hurricane Katrina for unemployment claims, but all across the country.

This week initial claims will skyrocket, and the following week continued claims will follow.

At the worst of the Great Recession, continued claims peaked at 6.635 million, but then steadily declined.    Over the next few weeks, continued claims will increase rapidly, and then will likely stay at that high level until the crisis abates.