Zillow Case-Shiller Forecast: House Price Gains "Back on the Gas"

From Matthew Speakman at Zillow: December Case-Shiller Results & January Forecast: Back on the Gas


The final reading of 2019 confirmed that a reacceleration of home price growth has indeed begun, after growth spent nearly the entire calendar year tapping on the brakes.

The national Case-Shiller Home Price Index rose 3.8% year-over-year in December. The smaller 10- and 20-city composite indices grew more slowly, at 2.4% and 2.9% year-over-year, respectively.
...
For-sale inventory remains near its lowest level on record, which has stoked competition for the relatively few homes on the market and nudged prices back upward as a result. The rebound in home price growth is also rooted in the sustained strength of the U.S. economy, which continues to ride a robust labor market, and mortgage rates that finished the year near their lowest levels since 2016 and have fallen even further since.
emphasis added 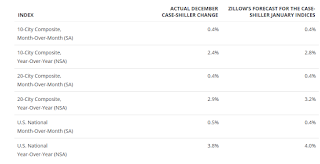 The Zillow forecast is for the year-over-year change for the Case-Shiller National index to be at 4.0% in January, up from 3.8% in December.