S&P/Case-Shiller released the monthly Home Price Indices for December ("December" is a 3 month average of October, November and December prices).

"The U.S. housing market continued its trend of stable growth in December,” says Craig J. Lazzara, Managing Director and Global Head of Index Investment Strategy at S&P Dow Jones Indices. “December’s results bring the National Composite Index to a 3.8% increase for calendar 2019. This marks eight consecutive years of increasing housing prices (an increase which is echoed in our 10- and 20-City Composites). At the national level, home prices are 59% above the trough reached in February 2012, and 15% above their pre-financial crisis peak. Results for 2019 were broad-based, with gains in every city in our 20-City Composite.
emphasis added 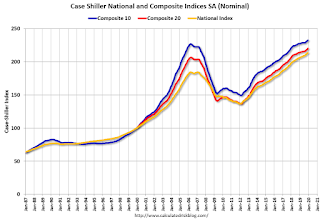 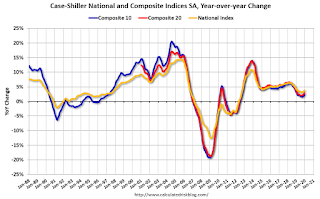 The National index SA is up 3.5% year-over-year.