The level of filings is still 51 percent below the peak reached in 2010, during the aftermath of the Great Recession, 2007-2009. A national wave of bankruptcies that began in 2008 reached a peak in the year ending September 2010, when nearly 1.6 million bankruptcy cases were filed. 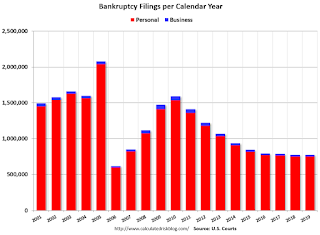 This graph shows the business and non-business bankruptcy filings by calendar year since 2001.

The sharp decline in 2006 was due to the so-called "Bankruptcy Abuse Prevention and Consumer Protection Act of 2005". (a good example of Orwellian named legislation since this was more a "Lender Protection Act").

This was the first increase in filings since 2010, but the increase was very small.   Bankruptcy filings have been at about the same level for the last four years.
Posted by Calculated Risk on 2/04/2020 04:33:00 PM
Newer Post Older Post Home