This might be a good time to review the seasonal pattern for employment.

Even in the best of years there are a significant number of jobs lost in the months of January and July. In 1994, when the economy added almost 3.9 million jobs, there were 2.25 million lost in January 1994 (not seasonally adjusted, NSA), and almost 1 million payroll jobs lost in July of that year.

A clear example of the a seasonal pattern is that teachers leave the workforce every year in July.  And then those teachers return to the payrolls in September and early October. Since this happens every year, the BLS applies a seasonal adjustment before reporting the headline number.

For the private sector, there are always a large number of jobs lost in January (retailers and others cutting jobs) and in September (summer hires let go). 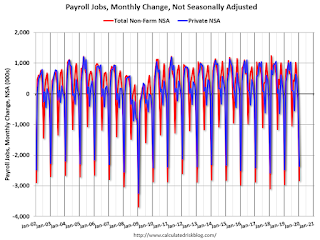 This graph shows the seasonal pattern since 2002 for both total nonfarm jobs and private sector only payroll jobs. Notice the large spike down every January.

Also notice the spike down in July (red) that is related to teachers leaving the labor force.

The key point is this is a series that NEEDS a seasonal adjustment.  There is significant, but predictable, seasonal variation in employment.