Since then both Las Vegas visitor and convention traffic has recovered.

Here is the data from the Las Vegas Convention and Visitors Authority. 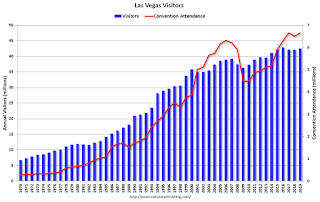 There were many housing related conventions during the housing bubble, so it took some time for convention traffic to recover.   Now there are marijuana conventions boosting traffic!

From the Las Vegas Convention and Visitors Authority:


While usually a relatively slower convention month, December 2019 bucked the trend as the destination enjoyed particularly strong convention attendance estimated at 356,100, +60.6% over last December; the YoY increase is largely due to the scheduling of Amazon Web Services (65k attendees) and Marijuana Business Conference (35k attendees) in December this year vs. November in 2018, plus the rotation of American Society of Health‐System Pharmacists (20k attendees) into the destination.