From the NAR: Existing-Home Sales Drop 1.3% in January


Existing-home sales declined in January, continuing a fluctuating pattern of monthly increases and declines, according to the National Association of Realtors®. Significant declines in the West region dragged down nationwide numbers, with the other three major U.S. regions reporting marginal – or no – changes last month.

Total existing-home sales, completed transactions that include single-family homes, townhomes, condominiums and co-ops, decreased 1.3% from December to a seasonally-adjusted annual rate of 5.46 million in January. However, for the second straight month, overall sales substantially increased year-over-year, up 9.6% from a year ago (4.98 million in January 2019)..
...
Total housing inventory at the end of January totaled 1.42 million units, up 2.2% from December, but down 10.7% from one year ago (1.59 million). The housing inventory level for January is the lowest level since 1999. Unsold inventory sits at a 3.1-month supply at the current sales pace, up from the 3.0-month figure recorded in December and down from the 3.8-month figure recorded in January 2019.
emphasis added 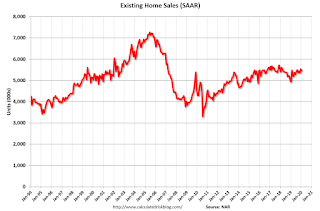 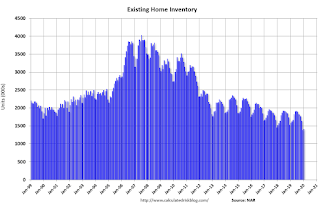 According to the NAR, inventory increased to 1.42 million in January from 1.39 million in December.   Headline inventory is not seasonally adjusted, and inventory usually decreases to the seasonal lows in December and January, and peaks in mid-to-late summer. 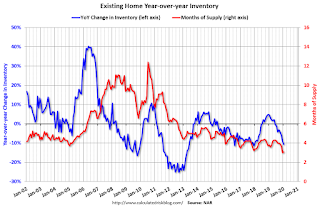 Inventory was down 10.7% year-over-year in January compared to January 2019.

Months of supply increased to 3.1 months in January.

This was close to the consensus forecast.  For existing home sales, a key number is inventory - and inventory is near record lows. I'll have more later …
Posted by Calculated Risk on 2/21/2020 10:12:00 AM
Newer Post Older Post Home