Mortgage applications decreased 6.4 percent from one week earlier, according to data from the Mortgage Bankers Association’s (MBA) Weekly Mortgage Applications Survey for the week ending February 14, 2020.

Added Kan, “Purchase applications fell 3 percent last week, as there continues to be some pullback after a strong January. Activity was still 10 percent higher than a year ago, but too few options – especially at the lower portion of the market – are slowing some would-be buyers.”
...
The average contract interest rate for 30-year fixed-rate mortgages with conforming loan balances ($510,400 or less) increased to 3.77 percent from 3.72 percent, with points remaining unchanged at 0.28 (including the origination fee) for 80 percent loan-to-value ratio (LTV) loans.
emphasis added 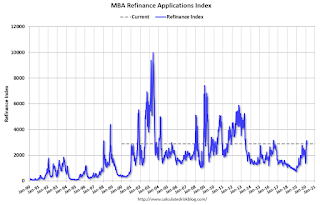 With lower rates, we saw a sharp increase in refinance activity, but mortgage rates would have to decline further to see a 2012 size refinance boom. 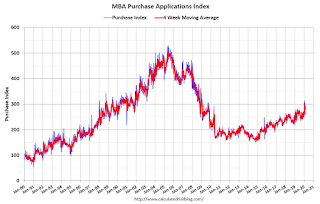