From the Richmond Fed: Manufacturing Activity Rebounded in January


Fifth District manufacturing activity rebounded in January, according to the most recent survey from the Richmond Fed. The composite index rose from −5 in December to 20 in January, as all three components— shipments, new orders, and employment— increased. Local business conditions also improved as this index saw its largest increase since February 2013. Manufacturers were optimistic that conditions would continue to strengthen in the coming months

Survey results indicate that both employment and wages rose for survey participants in January. However, firms continued to struggle to find workers with the necessary skills. They expected this difficulty to persist but wages and employment to continue to grow in the next six months.
emphasis added

This was the last of the regional Fed surveys for January. 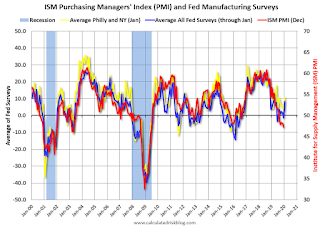 Based on these regional surveys, it seems likely the ISM manufacturing index will show expansion in January after five consecutive months of contraction.
Posted by Calculated Risk on 1/28/2020 10:41:00 AM
Newer Post Older Post Home