S&P/Case-Shiller released the monthly Home Price Indices for November ("November" is a 3 month average of September, October and November prices).

"The U.S. housing market was stable in November,” says Craig J. Lazzara, Managing Director and Global Head of Index Investment Strategy at S&P Dow Jones Indices. “With the month’s 3.5% increase in the national composite index, home prices are currently 59% above the trough reached in February 2012, and 15% above their pre-financial crisis peak. November’s results were broad-based, with gains in every city in our 20-city composite.

“At a regional level, Phoenix retains the top spot for the sixth consecutive month, with a gain of 5.9% for November. Charlotte and Tampa rose by 5.2% and 5.0% respectively, leading the Southeast region. The Southeast has led all regions since January 2019.”

“As was the case last month, after a long period of decelerating price increases, the National, 10-city, and 20-city Composites all rose at a modestly faster rate in November than they had done in October. This increase was broad-based, reflecting data in 15 of 20 cities. It is, of course, still too soon to say whether this marks an end to the deceleration or is merely a pause in the longer-term trend.”
emphasis added 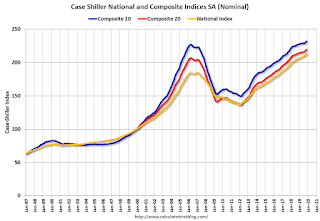 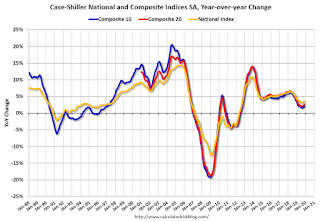 The National index SA is up 3.5% year-over-year.

Note: According to the data, prices increased in 20 of 20 cities month-over-month seasonally adjusted.