From HotelNewsNow.com: 2019’s weak growth trajectory to continue in Q1 2020


“Q1 2020 should see the fourth consecutive quarterly decline in the national occupancy level and the largest such decline … since Q3 2018,” [said] Mark Woodworth, senior managing director and head of lodging research for CBRE Hotel’s Americas Research …

For Q1 2020, STR is projecting a 0.6% increase in RevPAR, pushed up exclusively by average daily rate, which is expected to increase 1.1% year over year as occupancy decreases 0.5%.
emphasis added

From HotelNewsNow.com: STR: US hotel results for week ending 28 December


The U.S. hotel industry reported negative year-over-year results in the three key performance metrics during the week of 22-28 December 2019, according to data from STR.

In comparison with the week of 23-29 December 2018, the industry recorded the following: 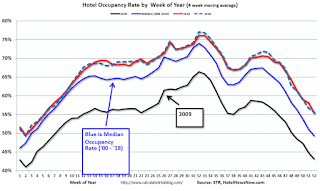 The average occupancy rate in 2019 was just behind the record rate in 2018 and essentially tied with 2017.   Another solid year for hotels.

Seasonally, the 4-week average of the occupancy rate will decline into January.