Unemployment rates were lower in December in 11 states, higher in 4 states, and stable in 35 states and the District of Columbia, the U.S. Bureau of Labor Statistics reported today. Eight states had jobless rate decreases from a year earlier, 1 state had an increase, and 41 states and the District had little or no change. The national unemployment rate, 3.5 percent, was unchanged over the month but was 0.4 percentage point lower than in December 2018.
...
South Carolina, Utah, and Vermont had the lowest unemployment rates in December, 2.3 percent each. The rates in Colorado (2.5 percent), Florida (3.0 percent), Georgia (3.2 percent), Illinois (3.7 percent), Oregon (3.7 percent), South Carolina (2.3 percent), Utah (2.3 percent), and Washington (4.3 percent) set new series lows. (All state series begin in 1976.) Alaska had the highest jobless rate, 6.1 percent.
emphasis added 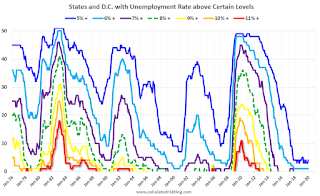 Currently only one state, Alaska, has an unemployment rate at or above 6% (dark blue).  Note that Alaska is at a series low (since 1976).  Three states and the D.C. have unemployment rates above 5%; Alaska, Mississippi and West Virginia.