Fed's Flow of Funds: Household Net Worth Increased in Q3


The net worth of households and nonprofits rose to $113.8 trillion during the third quarter of 2019. The value of directly and indirectly held corporate equities decreased $0.3 trillion and the value of real estate increased $0.2 trillion. 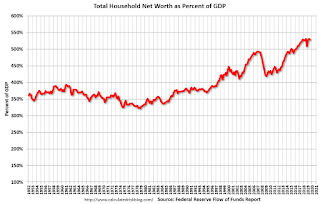 Net Worth as a percent of GDP decreased slightly in Q3. 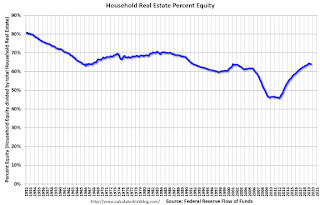 Note: about 30.3% of owner occupied households had no mortgage debt as of April 2010. So the approximately 50+ million households with mortgages have far less than 64.0% equity - and about 2 million homeowners still have negative equity. 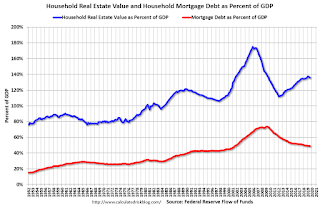 The value of real estate, as a percent of GDP, decreased slightly in Q3, and is above the average of the last 30 years (excluding bubble).  However, mortgage debt as a percent of GDP, continues to decline.
Posted by Calculated Risk on 12/12/2019 02:07:00 PM
Newer Post Older Post Home