From Matthew Speakman at Zillow: September Case-Shiller Results and October Forecast: Steady as She Goes


The S&P CoreLogic Case-Shiller U.S. National Home Price Index® rose 3.2% year-over-year in September (non-seasonally adjusted), up from 3.1% in August. Annual growth in the smaller 10-city index was unchanged from August, and was up slightly in the 20-city index (to 2.1%, from 2% in August).
…
In the meantime, annual growth in October as reported by Case-Shiller is expected to stay steady in all three major indices. S&P Dow Jones Indices is expected to release data for the October S&P CoreLogic Case-Shiller Indices on Tuesday, Dec. 31. 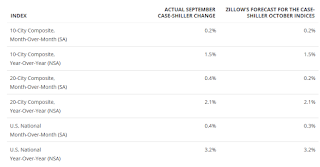 The Zillow forecast is for the year-over-year change for the Case-Shiller National index to be at 3.2% in October, the same as 3.2% in September.