The Mall vacancy rate increased to 9.4%, from 9.3% last quarter and a low of 7.8% in 2016. Rent growth was positive at 0.2% for the quarter and 0.6% for the year. Although retail store closures and bankruptcies still dominate the news, the overall retail property statistics have held steady as new users fill vacated space of large department stores.
...
Similar to its sibling property types, the retail sector continued to shrug off bad news in the broader sector. Just this week, the news media seemed to yawn when retailing power house Forever 21 declared bankruptcy. Reports said they would close 178 of their 600 stores. The retail sector has withstood numerous store closings, this latest one should not deliver a big blow. Retail spending remains healthy as consumer spending keeps climbing in step with job growth. In short, the retail sector is poised to continue to grow at the current slow but steady rate.
emphasis added 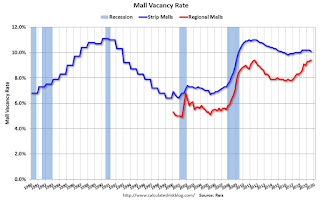 Recently both the strip mall and regional mall vacancy rates have increased from an already elevated level.