Now that new home sales have reached a new cycle high (in June), I'd like to update a couple of graphs in a previous post (most of this from an earlier post).

For the economy, what we should be focused on are single family starts and new home sales. As I noted in Investment and Recessions "New Home Sales appears to be an excellent leading indicator, and currently new home sales (and housing starts) are up solidly year-over-year, and this suggests there is no recession in sight."

For the bottoms and troughs for key housing activity, here is a graph of Single family housing starts, New Home Sales, and Residential Investment (RI) as a percent of GDP. 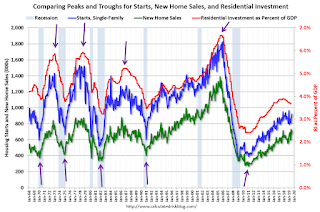 RI as a percent of GDP has been sluggish recently.

Also, look at the relatively low level of RI as a percent of GDP, new home sales and single family starts compared to previous peaks.   To have a significant downturn from these levels would be surprising. 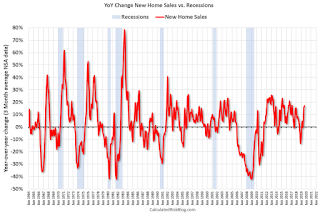 The second graph shows the YoY change in New Home Sales from the Census Bureau.

2) It is also interesting to look at the '86/'87 and the mid '90s periods. New Home sales fell in both of these periods, although not quite 20%. As I noted in earlier posts, the mid '80s saw a surge in defense spending and MEW that more than offset the decline in New Home sales. In the mid '90s, nonresidential investment remained strong.

Although new home sales were down towards the end of 2018, the decline wasn't that large historically.  As I noted last Fall, I wasn't even on recession watch.   Now new home sales are up solidly year-over-year.  No worries.