A long, long, long time ago - almost twelve years ago - I wrote Investment and Recessions, explaining the usefulness of New Home Sales as a leading indicator.

Here are some updated graphs. My view is new home sales and housing starts are two of the best leading indicators for the economy (but not always). 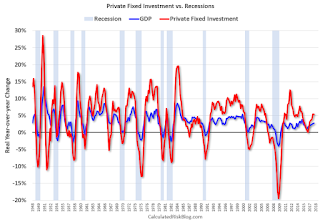 2) Private fixed investment has fallen 14 times since 1948, with only 11 recessions. 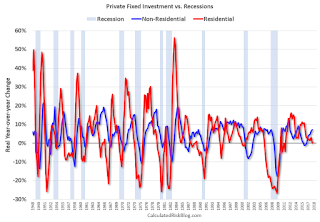 But the most useful information is that typically recessions are preceded by declines in residential investment. Maybe we can use that information. 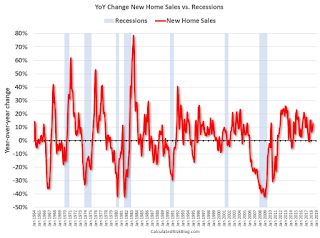 The third graph shows the YoY change in New Home Sales from the Census Bureau.

1) New Home Sales appears to be an excellent leading indicator.

2) Currently new home sales (and housing starts) are up solidly year-over-year, and this suggests there is no recession in sight.