Both the national average asking rent and effective rent, which nets out landlord concessions, increased 0.8% in the third quarter. At $1,484 per unit (asking) and $1,413 per unit (effective), the average rents have increased 3.8% from the third quarter of 2018.
...
Apartment occupancy growth was subdued in the third quarter, although fundamentals remain healthy. That is, demand growth increased in line with supply growth, and rent growth held steady at just below 1% in the quarter. Despite a deceleration in the overall economy, the demand for apartments should continue at this pace as the housing market takes the brunt of any and all uncertainty. New and existing homes sales have improved in the last month, but condo and coop sales were lower than a year ago. The back-and-forth in the two markets should continue this year and next as consumers exercise caution given so much uncertainty on the trade war and global front. Still, the housing vs. apartment markets are not a zero-sum game. As long as job growth remains healthy, the demand for both will stay positive shoring up home prices and rents equally.
emphasis added 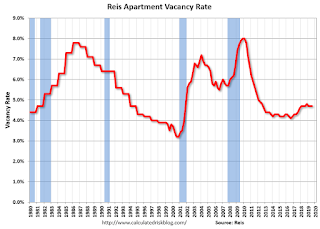 The vacancy rate had mostly moved sideways for the last two years - after increasing from the low in 2016..