1) Existing home sales were up 2.6% year-over-year (YoY) in August.  This was the second consecutive YoY increase - following 16 consecutive months with a YoY decrease in sales.

3) As usual, housing economist Tom Lawler's forecast was closer to the NAR report than the consensus. See: Lawler: Early Read on Existing Home Sales in August.   The consensus was for sales of 5.38 million SAAR.  Lawler estimated the NAR would report 5.42 million SAAR in July, and the NAR actually reported 5.49 million SAAR. 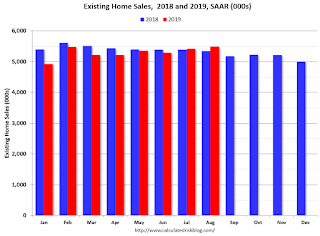 The comparisons will be easier towards the end of this year, and with lower mortgage rates, sales might even finish the year unchanged or even up from 2018. 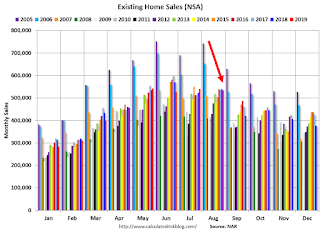 Overall this was a solid report.