From the Richmond Fed: Manufacturing Activity Was Moderate in August


Fifth District manufacturing activity was moderate in August, according to the most recent survey from the Federal Reserve Bank of Richmond. The composite index rose from −12 in July to 1 in August, buoyed by increases in the indexes for shipments and new orders. However, the third component, employment, fell.
...
Survey results suggested that many firms saw employment decline while the average workweek increased in August. Respondents reported persistent wage growth but still struggled to find workers with the necessary skills.
emphasis added

This was the last of the regional Fed surveys for August. 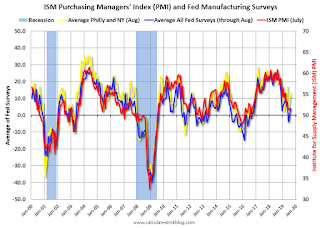 The regional surveys were weak again in August, but slightly better than in July.

Based on these regional surveys, it seems likely the ISM manufacturing index for August will be weak again.
Posted by Calculated Risk on 8/27/2019 10:10:00 AM
Newer Post Older Post Home