IMPORTANT NOTE: The data below is based on the Census 2018 estimates. Housing economist Tom Lawler has pointed out some questions about earlier Census estimates, see: Lawler: "New Long-Term Population Projections Show Slower Growth than Previous Projections but Are Still Too High"

This month the Census Bureau released the population estimates for 2018 by age, and I've updated the table from the previous post (replacing 2015 with 2018 data). 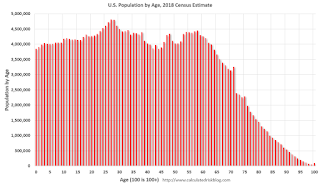 This graph, based on the 2018 population estimate, shows the U.S. population by age in July 2018 according to the Census Bureau.

Note the younger baby boom generation dominated in 2010.  By 2018 the millennials have taken over.  And by 2020, the boomers are off the list.