Home prices continued to tap on the brakes in February, moderating their earlier breakneck speeds, particularly in pricey West Coast markets. The S&P CoreLogic Case-Shiller National Home Price Index, which tracks home prices nationally and in major metro areas, rose 4% in February from the previous year, a slowdown from 4.2% in January.
...
Below is Zillow’s Case-Shiller forecast for March. It’s scheduled for release on May 28.

The Zillow forecast is for the year-over-year change for the Case-Shiller National index to be at 4.0% in March, the same as in February. 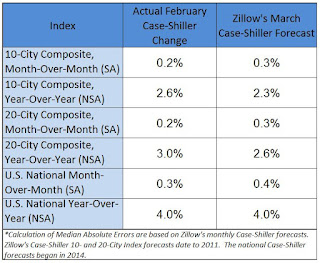