CR Note: Most of this survey is noise, but there is some information, especially on the labor market and the "Single Most Important Problem".


The Small Business Optimism Index improved slightly, increasing 0.1 points to 101.8. Three Index components fell, two were unchanged, and five improved. The major soft spot was in inventories: stocks were viewed as too large (a negative in the Index) and plans to invest in inventories turned slightly negative (e.g. more firms plan reductions than additions). The labor market indicators improved, capital spending plans held steady, and the outlook for expansion and real sales gained ground as did reports of rising earnings.
..
Job creation was solid in March with a net addition of 0.50 workers per firm (including those making no change in employment), close to February’s record of 0.52, and up from 0.33 in January.

Twenty-one percent of owners cited the difficulty of finding qualified workers as their Single Most Important Business Problem, only 4 points below the record high. Thirty-nine percent of all owners reported job openings they could not fill in the current period, up 2 points from February and equal to the record high set in December.
emphasis added 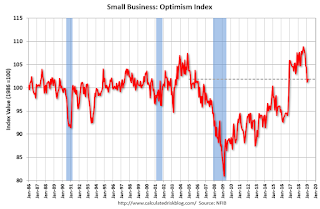 This graph shows the small business optimism index since 1986.

Note: Usually small business owners complain about taxes and regulations (currently 2nd and 3rd on the "Single Most Important Problem" list).  However, during the recession, "poor sales" was the top problem. Now the difficulty of finding qualified workers is the top problem.
Posted by Calculated Risk on 4/09/2019 08:47:00 AM
Newer Post Older Post Home