Another Update: Watching existing home "for sale" inventory is very helpful. As an example, the increase in inventory in late 2005 helped me call the top for housing.

Inventory, on a national basis, was up 3.2% year-over-year (YoY) in February, this was the seventh consecutive month with a YoY increase, following over three years of YoY declines.

The graph below shows the YoY change for non-contingent inventory in Houston, Las Vegas, and Sacramento (through March) and Phoenix, and total existing home inventory as reported by the NAR (through February). 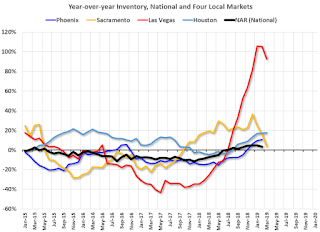 Note that inventory was up 92% YoY in Las Vegas in March (red), the eight consecutive month with a YoY increase.

Houston is a special case, and inventory was up for several years due to lower oil prices, but declined YoY last year as oil prices increased.  Inventory was up 17.5% year-over-year in Houston in March.

Inventory is a key for the housing market.  Right now it appears the inventory build that started last year is slowing.

Also note that inventory in Seattle was up 136% year-over-year in March (not graphed)!