From HotelNewsNow.com: STR: US hotel results for week ending 6 April


The U.S. hotel industry reported positive year-over-year results in the three key performance metrics during the week of 31 March through 6 April 2019, according to data from STR.

In comparison with the week of 1-7 April 2018, the industry recorded the following:

STR analysts note that performance growth was lifted due to comparison with Easter Sunday and the days immediately following in 2018.
emphasis added 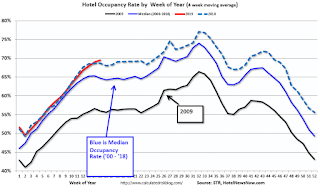