On the surface, rail traffic in February 2019 wasn’t very good. Total carloads were down 2.7% over February 2018, just the second monthly decline in the past year; 12 of the 20 carload categories were down, the most since January 2018; and intermodal was down 0.9%, its first decline in two years. But, like last month, weather likely played a significant but impossible-to-measure-precisely role in February — e.g., higher than normal rain and snow in California, with mudslides and track washouts thrown in for good measure; high winds, extreme cold, and record snowfalls in the Upper Great Plains; and so on. Winter always brings problems for railroads, but it seems this year was worse than last year in many areas.
emphasis added 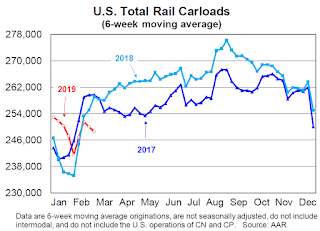 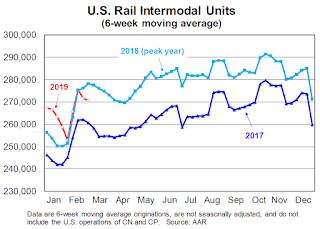 
U.S. railroads also originated 1.09 million intermodal containers and trailers in February 2019, down 0.9%, or 9,513 units, from February 2018. (Intermodal is not included in carloads.) It was the first yearover- year monthly decline for intermodal since January 2017. Like carloads, intermodal was surely affected by the weather, but non-weather factors might have played a role as well — e.g., imports that came ashore earlier to beat potential higher tariffs. Also, it’s not like intermodal fell off a cliff in February 2019: weekly average intermodal volume was 273,625 units, the second most ever for February (behind February 2018).

Traffic will pick up in March, and there might be some bounce back from the poor weather.
Posted by Calculated Risk on 3/08/2019 03:35:00 PM
Newer Post Older Post Home