Net absorption was 39,732 units, lower than the previous quarter’s absorption of 50,502 units and below the average quarterly absorption of 2017 of 46,926 units. Construction was 49,944 units, also below the third quarter’s 62,313 units and below the 2017 quarterly average of 61,869 units.
...
Apartment construction started to accelerate in 2017 and has remained elevated throughout 2018. This had raised concerns that the apartment market was becoming overbuilt. Yet consistently, apartment occupancy growth has nearly kept pace with supply growth, as demand for apartments has been robust throughout 2018. Not only has job growth supported apartment demand, but the weaker housing market has also benefitted the apartment market: existing home sales climbed in October and November but had fallen in eight of the previous ten months and is down 7% from a year ago. Although mortgage rates have fallen over the last few weeks pushing applications up a bit, the housing market could continue to suffer given the recent stock market declines that have sent jitters throughout the market. Moreover, last year’s tax reform that doubled the standard deduction reduced the incentive to buy a home, which has also helped the apartment market.

We still expect construction to remain robust in 2019 before completions drop off in 2020. Occupancy is expected to remain positive, although vacancy rates are expected to increase, as new supply will outpace demand growth in most metros. That said, stronger apartment demand in a number of metros could push developers to file more permits, which could extend the construction cycle. This is especially likely in New York and Suburban Virginia where Amazon is building two new headquarters and creating 25,000 jobs over ten years.

Our outlook remains favorable given the current conditions of positive job growth and tepid housing sales. The recent momentum should keep rent growth positive even as vacancy rates are likely to edge up a bit in the next few quarters.
emphasis added 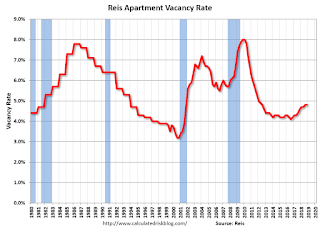