Fed's Flow of Funds: Household Net Worth increased in Q3


The net worth of households and nonprofits rose to $109.0 trillion during the third quarter of 2018. The value of directly and indirectly held corporate equities increased $1.2 trillion and the value of real estate increased $0.2 trillion. 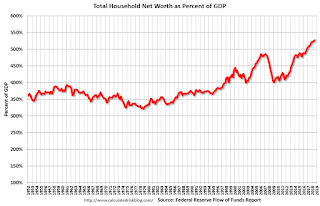 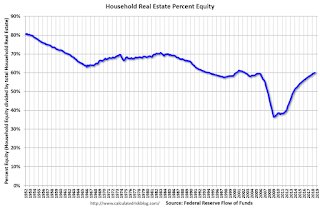 Note: about 30.3% of owner occupied households had no mortgage debt as of April 2010. So the approximately 50+ million households with mortgages have far less than 59.9% equity - and about 2.2 million homeowners still have negative equity. 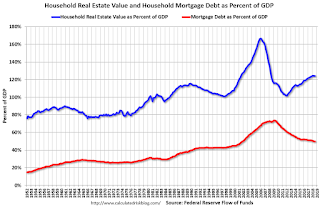 Mortgage debt has declined by $0.43 trillion from the peak. Studies suggest most of the decline in debt has been because of foreclosures (or short sales), but some of the decline is from homeowners paying down debt (sometimes so they can refinance at better rates).

The value of real estate, as a percent of GDP, declined slightly in Q3, and is above the average of the last 30 years (excluding bubble).  However, mortgage debt as a percent of GDP, continues to decline.
Posted by Calculated Risk on 12/06/2018 12:53:00 PM
Newer Post Older Post Home