If the shutdown doesn't end quickly - the one in January 2018 lasted just two days - several agencies will not release regular government reports. For the current week, the November new home sales report will be delayed.

Update: The BLS is fully funded, and the December employment report will be released on time.

Private data - like the pending home sales report this week - will still be released. All Federal Reserve data will continue to be released (separate funding).

If the shutdown lasts through this week, we should see a spike in claims in the report released the following week. 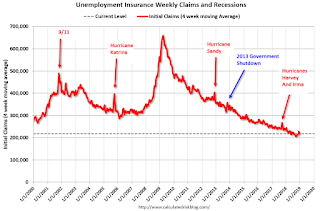 Note the spike related to the 2013 government shutdown. Weekly claims jumped 66,000 in the week following the shutdown in 2013. We will probably see a similar spike in the report released the week of December 31st (if the shutdown does not end quickly).

Another impact from the shutdown will be on mortgage lending.

In 2013, the IRS stopped processing 4506-T forms (the required two years of tax returns for mortgage lending). For loans ready to close, this will not be a problem. And lenders can still accept applications, but this could slow closings a few weeks depending on the duration of the shutdown.

There are many other impacts from the shutdown, and hopefully it will be resolved soon.