From the Chicago Fed: Index Points to an Increase in Economic Growth in November


Led by improvements in production-related indicators, the Chicago Fed National Activity Index (CFNAI) increased to +0.22 in November from a neutral reading in October. Two of the four broad categories of indicators that make up the index increased from October, and three of the four categories made positive contributions to the index in November. The index’s three-month moving average, CFNAI-MA3, moved down to +0.12 in November from +0.23 in October.
emphasis added 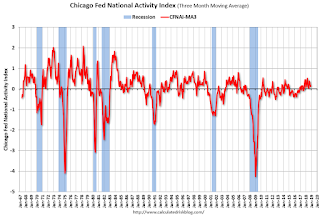 This suggests economic activity was slightly above the historical trend in November (using the three-month average).