It’s not like the sky is falling or anything, but while U.S. rail traffic numbers were very solid a few months ago, they were less solid in November. Total carloads fell 0.2% (2,418 carloads) in November 2018 from November 2017, their first decline in nine months. Major blame goes to crushed stone, sand, and gravel, carloads of which fell 12.8% (12,090 carloads) thanks to a decline in carloads of frac sand. … Intermodal rose 2.5% in November. That sounds pretty good, but it’s the smallest increase in 19 months. ... In terms of rail traffic, November might just be the “back” in a case of two steps forward, one step back. But it could be the start of something more. Stay tuned.
emphasis added 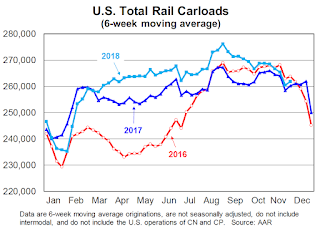 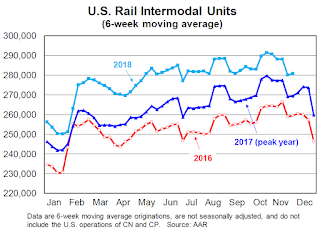