Fifth District manufacturing activity grew moderately in November, according to results of the most recent survey from the Federal Reserve Bank of Richmond. The composite index slipped from 15 in October to 14 in November, pulled down by drops in the indexes for new orders and employment, while the other component, the index for shipments, rose. However, all three continued to reflect expansion, as did most other measures of manufacturing activity. Firms were optimistic, expecting growth to continue in the next six months.

While survey results suggested growth in employment and wages among manufacturing firms in November, the struggle to find workers with the required skills persisted.
emphasis added 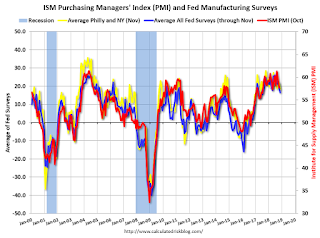 Based on these regional surveys, it seems likely the ISM manufacturing index will decline slightly, but remain solid in November (to be released on Monday, December 3rd).
Posted by Calculated Risk on 11/28/2018 01:27:00 PM
Newer Post Older Post Home