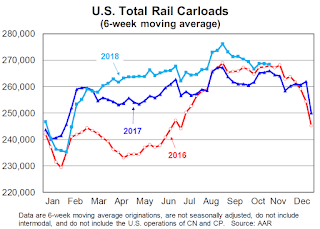 
U.S. railroads originated 1,338,037 carloads in October 2018, up 1.0%, or 12,598 carloads, over October 2017. It’s the eighth straight monthly increase for total carloads, but it’s also the smallest percentage increase in those eight months. In October 2018, 13 of the 20 commodity categories the AAR tracks had carload increases, the fewest since March 2018.