This gives a total of 4.06% delinquent or in foreclosure.


Today, the Data & Analytics division of Black Knight, Inc. released its latest Mortgage Monitor Report, based on data as of the end of August 2018. This month, in light of the devastating flooding experienced in North and South Carolina as a result of Hurricane Florence, Black Knight examined the potential mortgage-related impact that could follow. Looking at the 34 counties in those states declared disaster areas by the Federal Emergency Management Agency (FEMA) as of Sept. 28, and using last year’s hurricanes as a model, Black Knight’s analysis shows approximately 474,000 mortgaged properties in the impacted zone. As Ben Graboske, executive vice president of Black Knight’s Data & Analytics division explained, if the post-storm trajectory follows that of Hurricanes Harvey and Irma, thousands of Americans affected by Hurricane Florence could become past-due in the coming months.

“Although the situation in the Carolinas continues to evolve as we speak, we are beginning to get a sense of the potential scope of the storm’s impact from a mortgage performance aspect,” said Graboske. “As those affected by the storm begin recovery efforts, recent history suggests many will have some difficulty remaining current on their mortgages. Of the nearly 1.2 million properties in the 34 counties in the Carolinas thus far declared disaster areas by FEMA, approximately 474,000 have at least one mortgage. The majority – 80 percent – of these properties are in North Carolina, and account for more than 20 percent of the homes in that state. The remainder are in South Carolina. In general, while average home prices in these areas run $100,000 below the national average, they tend to be more heavily leveraged. Nationally, the average combined loan-to-value (CLTV) ratio is 51 percent, while in these FEMA-declared areas the average is 63 percent. As a whole, the area also had a higher-than-average delinquency rate of 4.4 percent going into the storm, as compared to the national average of 3.5 percent.
emphasis added 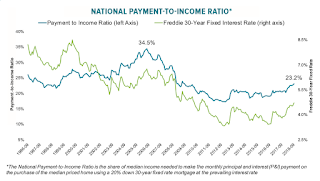 Here is a graph from the Mortgage Monitor showing mortgage payment to income ratio.

• As of September, it now requires a $1,238 monthly P&I payment to purchase the average-priced home with a 20% down payment

• The monthly payment needed to purchase the average home has risen by 16% so far in 2018, compared to just 3% for all of 2017, marking the fourth highest single year jump in 22 years, with 3 months still remaining in the year

• Factoring in income growth, it now requires 23.2% of median income to make the monthly payments on the average home purchase, up from 20.9% entering the year