Weakness in a few commodity categories notwithstanding, rail traffic in September 2018 was consistent with the economy we have today in which fundamentals like industrial output and consumer spending are solid. Total U.S. carloads were up 2.6%, or 26,826 carloads, in September 2018 over September 2017, their seventh straight year-over-year increase.
…
Intermodal volume in September was up 6.2%, their 20th straight monthly increase. The last two weeks of September 2018 were the two highest-volume U.S. intermodal weeks in history. 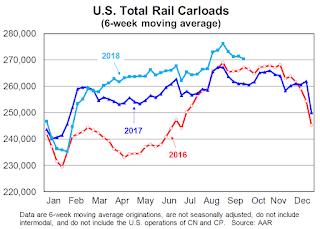 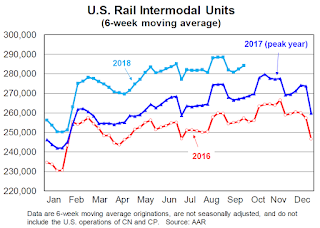