From HotelNewsNow.com: STR: US hotel results for week ending 8 September


The U.S. hotel industry reported mostly negative year-over-year results in the three key performance metrics during the week of 2-8 September 2018, according to data from STR.

In comparison with the week of 3-9 September 2017, the industry recorded the following:

STR analysts note that performance percentage changes in several major markets were significantly affected by the comparison with the post-Hurricane Harvey and pre-Hurricane Irma time period in 2017.
…
Houston, Texas, reported the steepest decreases in each of the three key performance metrics: occupancy (-42.2% to 50.0%), ADR (-19.6% to US$90.73) and RevPAR (-53.6% to US$45.36). Houston’s hotel performance was lifted in the weeks and months that followed Hurricane Harvey in 2017 as properties filled with displaced residents, relief workers, insurance adjustors, media members, etc.
emphasis added 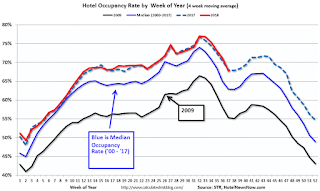 The occupancy rate, to date, is just ahead of the record year in 2017.

Note: 2017 finished strong due to the impact of the hurricanes.   There will be some boost to hotel occupancy in the Carolina region following hurricane Florence, but I expect the overall occupancy to be lower in 2018 than in 2017.