Annual Vehicle Sales: On Pace to decline in 2018

The BEA released their estimate of August vehicle sales. The BEA estimated sales of 16.596 million SAAR in August 2018 (Seasonally Adjusted Annual Rate), down 0.6% from the July sales rate, and up 0.9% from August 2017 (August was the weakest sales month last year due to the impact of the hurricanes).

Through August, light vehicle sales are on pace to be down slightly in 2018 compared to 2017.

My guess is vehicle sales will finish the year with sales lower than in 2017 (sales in late 2017 were boosted by buying following the hurricanes), and will probably be below 17 million for the year (the lowest since 2014). 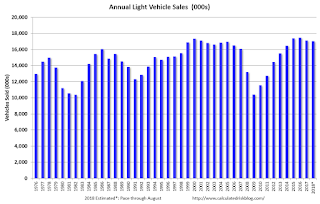 Sales for 2018 are estimated based on the pace of sales during the first eight months.

The second graph below shows the mix of sales since 1976 (Blue is cars, Red is light trucks and SUVs). 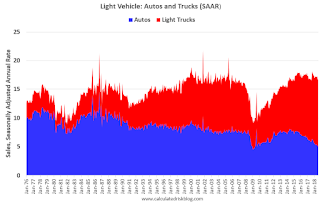 The mix has changed significantly. Back in 1976, most light vehicles were passenger cars - however car sales have trended down over time.

The second graph shows the percent of light vehicle sales between passenger cars and trucks / SUVs. 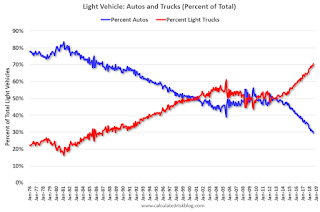 Over time the mix has changed toward more and more light trucks and SUVs.

Only when oil prices are high, does the trend slow or reverse.

Recently oil prices have been fairly low (now increasing), and the percent of light trucks and SUVs is just over 70% for the first time ever.