It’s hard not to notice the winds beginning to shift in the housing market. But those changes have yet to reach the point where they’ve fully transitioned from home buyer headwinds into tailwinds, and likely won’t until at least the end of the decade.

Still, the signs of change are here: The U.S. National Case-Shiller Home Price Index climbed 6.2 percent in June from a year earlier, slightly slower than the 6.4 percent annual growth recorded in May. June prices rose 0.3 percent from May – slightly below expectations.
...
But the slowdown, and the changes it brings, will be gradual. Inventory, when it begins to rise, will be coming up from incredibly low levels. Home value growth remains well above historic norms, even as it slows in some markets – and that rapid growth still makes saving an adequate down payment a challenge for many buyers. And while sellers are seemingly more open to cutting their initial asking price than in recent months, that trend is more prominent at the upper end of the market where there is more selection.
...
Zillow’s expects Case-Shiller data for July, to be released September 25, to show national home-price appreciation of 6.1 percent year-over-year.

The Zillow forecast is for the year-over-year change for the Case-Shiller National index to be smaller in July than in June. 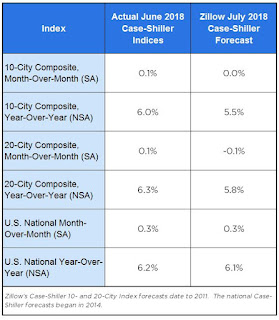