This is the lowest serious delinquency rate for Freddie Mac since March 2008. 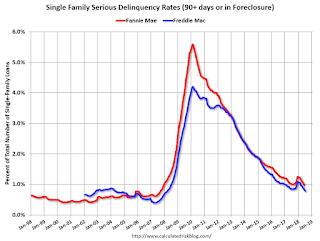 The increase in the delinquency rate late last year was due to the hurricanes - no worries about the overall market (These are serious delinquencies, so it took three months late to be counted).

I expect the delinquency rate to decline to a cycle bottom in the 0.5% to 0.75% range - but this is close to a bottom.