From the MBA: Mortgage Delinquencies Down in 2nd Quarter of 2018


The delinquency rate for mortgage loans on one-to-four-unit residential properties fell to a seasonally adjusted rate of 4.36 percent of all loans outstanding at the end of the second quarter of 2018. 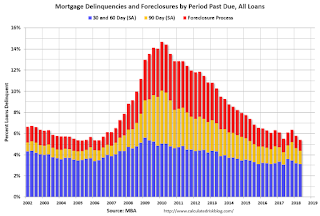 The percent of loans delinquent decreased in Q2, as "the impact of the hurricanes from one year ago lessens".

The percent of loans in the foreclosure process continues to decline, and is close to normal levels.
Posted by Calculated Risk on 8/16/2018 10:34:00 AM
Newer Post Older Post Home