The headline jobs number at 157,000 for July was below consensus expectations of 190 thousand, however the previously two months were revised up by a combined 59 thousand. Overall this was a solid report.

Wage growth was close to expectations in July. From the BLS: 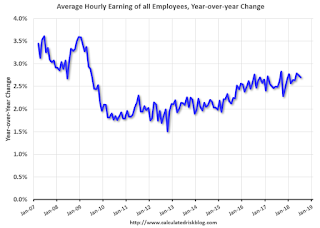 The graph shows the nominal year-over-year change in "Average Hourly Earnings" for all private employees.  Nominal wage growth was at 2.7% YoY in July. 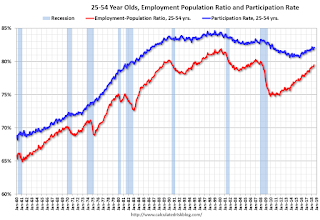 The participation rate had been trending down for this group since the late '90s, however, with more younger workers (and fewer 50+ age workers), the prime participation rate might move up some more.  The employment population ratio is almost back to the pre-great recession highs. 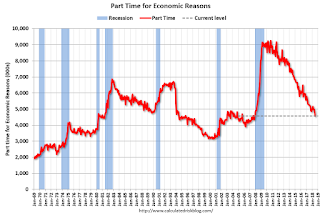 
"The number of persons employed part time for economic reasons (sometimes referred to as involuntary part-time workers) was little changed in July, at 4.6 million, but was down by 669,000 over the year. These individuals, who would have preferred full-time employment, were working part time because their hours had been reduced or they were unable to find full-time jobs."

These workers are included in the alternate measure of labor underutilization (U-6) that decreased to 7.5% in June. This is the lowest level for U-6 since May 2001. 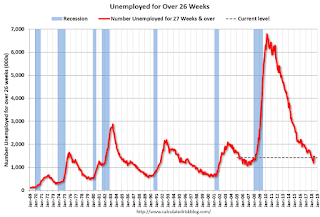 According to the BLS, there are 1.435 million workers who have been unemployed for more than 26 weeks and still want a job. This was down from 1.478 million in June.

The headline jobs number was below expectations, however the previous two months were revised up.

The headline unemployment rate decreased to 3.9%,  and U-6 decreased to 7.5% - the lowest rate since 2001.  Wages growth was close to expectations.