S&P/Case-Shiller released the monthly Home Price Indices for May ("May" is a 3 month average of March, April and May prices).

From S&P: Rise in Home Prices Remains Steady at 6.4% According to S&P CoreLogic Case-Shiller Index

“Home prices continue to rack up gains two to three times greater than the inflation rate,” says David M. Blitzer, Managing Director & Chairman of the Index Committee at S&P Dow Jones Indices. “The year-over-year increases in the S&P CoreLogic Case-Shiller National Index have topped 5% every month since August 2016. Unlike the boom-bust period surrounding the financial crisis, price gains are consistent across the 20 cities tracked in the release; currently, the range of the largest to smallest price change is 10 percentage points compared to a 20 percentage point range since 2001, and a 25 percentage point range between 2006 and 2009. Not only are prices rising consistently, they are doing so across the country.

“Continuing price increases appear to be affecting other housing statistics. Sales of existing single family homes – the market covered by the S&P CoreLogic Case-Shiller Indices – peaked last November and have declined for three months in a row. The number of pending home sales is drifting lower as is the number of existing homes for sale. Sales of new homes are also down and housing starts are flattening. Affordability – a measure based on income, mortgage rates and home prices – has gotten consistently worse over the last 18 months. All these indicators suggest that the combination of rising home prices and rising mortgage rates are beginning to affect the housing market.”
emphasis added 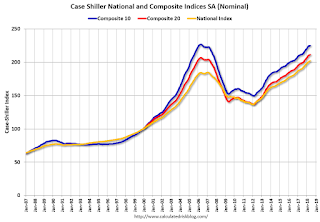 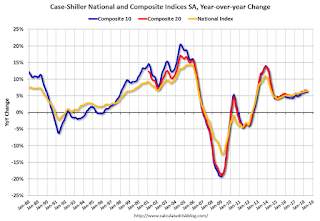 The National index SA is up 6.4% year-over-year.