New home sales for June were reported at 631,000 on a seasonally adjusted annual rate basis (SAAR). This was below the consensus forecast, and the three previous months, combined, were revised down.

Sales in June were up 2.4% year-over-year compared to June 2017.   This was weak YoY growth, especially since was a fairly easy comparison since new home sales were soft in mid-year 2017.

There have been several articles recently about a weaker housing market (see: Has the Housing Market Peaked? (Part 2)).  However I expect new home sales and single family starts will increase further over the next couple of years. 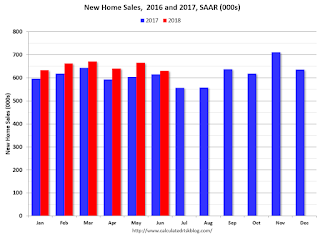 Sales are up 6.9% through June compared to the same period in 2017. Decent growth so far, and the next two months will be an easy comparison to 2017.

This is on track to be close to my forecast for 2018 of 650 thousand new home sales for the year; an increase of about 6% over 2017.   There are downside risks to that forecast, such as higher mortgage rates, higher costs (labor and material), and possible policy errors. 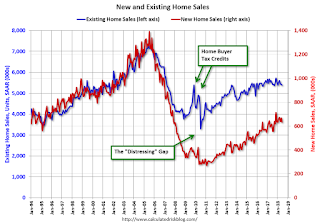 The "distressing gap" graph shows existing home sales (left axis) and new home sales (right axis) through June 2018. This graph starts in 1994, but the relationship had been fairly steady back to the '60s.