The U.S. economy is clicking right now, and freight railroads are both beneficiaries and enablers of that. In May 2018, originated carloads on U.S. railroads were up 3.2% over May 2017, the third straight month with year-over-year growth greater than 3%. In May 2018, 15 of the 20 commodity categories the AAR tracks saw higher carloads, including nearly all the major categories. Total carloads averaged 263,884 in May 2018, the most for May since 2015. … May was a good month for intermodal too: U.S. intermodal originations in May 2018 were up 6.6% over last year. 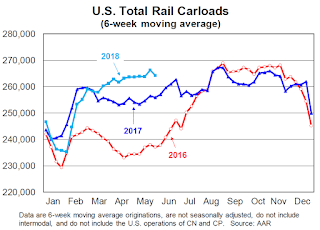 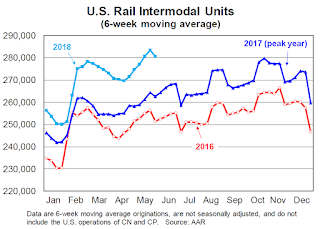