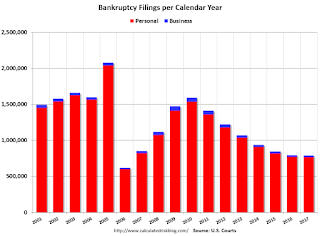 This graph shows the business and non-business bankruptcy filings by calendar year since 2001.

The sharp decline in 2006 was due to the so-called "Bankruptcy Abuse Prevention and Consumer Protection Act of 2005". (a good example of Orwellian named legislation since this was more a "Lender Protection Act").

Other than 2006, this was the lowest level for filings since 1995. This is another indicator of an economy that has mostly recovered from the housing bust and financial crisis.
Posted by Calculated Risk on 2/04/2018 08:09:00 AM
Newer Post Older Post Home