This gives a total of 5.36% delinquent or in foreclosure.


Today, the Data & Analytics division of Black Knight, Inc. released its latest Mortgage Monitor Report, based on data as of the end of December 2017. This month, Black Knight’s examination of year-end trends in mortgage performance found that – as expected – the year’s multiple major hurricanes have left lasting effects. However, as Black Knight Data & Analytics Executive Vice President Ben Graboske explained, when taking the storms’ impacts into consideration, 2017 continued a long-term trend of improvement for the market.

“Hurricanes Harvey and Irma significantly impacted 2017 mortgage performance metrics,” said Graboske. “Overall, there were approximately 164,000 more past-due loans at the end of 2017 than the year before, pushing the national delinquency rate to a 23-month high. When Black Knight isolated non-hurricane-impacted areas – which represent 90 percent of the entire active U.S. mortgage universe – we see the national delinquency rate actually fell to 11 percent below long-term norms. Likewise, the 90-day delinquency rate was also up six percent from last year, with roughly a third more seriously delinquent loans than we'd expect in a healthy market. Excluding the hurricane impact, though, we see that there were 84,000 fewer loans 90 or more days past due than last year; a 14 percent reduction. The national non-current rate – which tracks all loans 30 or more days past due or in active foreclosure – edged down slightly from 2016, even including the effects of the storms. Isolating those non-hurricane areas, though, we see that the total number of past-due mortgages fell by more than 140,000 – which brought the non-current rate in these areas down 10 percent below long-term norms.

“Due to the various foreclosure moratoria put into place after the storms, there was no hurricane impact to speak of in that regard. In fact, the improvement in foreclosure inventory – which continued unabated in 2017 – may have actually received a short-term boost from the moratoria. In any case, it was a record-setting year in terms of foreclosure activity. Just 649,000 foreclosure starts were initiated in 2017, which was the fewest of any year since 2000, with the lowest number of first-time starts on record. In fact, first-time foreclosure starts were 15 percent below 2016 levels and roughly half the annual average seen from 2000-2005. Likewise, the year saw the lowest single-year total for foreclosure completions since the turn of the century. All in all, the inventory of loans in active foreclosure is on track to normalize in 2018. That said, there are still issues with aged inventory; more than 125,000 active foreclosures have had no payments made in more than two years. Of those, some 63,000 have gone unpaid for five years or more.”

Black Knight also observed evidence of the “hurricane effect” at work in the home equity market. Similar to the first lien market, nearly 10 percent of active home equity loans and lines of credit – over 1 million in total – are located in areas impacted by the year's major hurricanes, primarily in Florida. Noticeable jumps were seen in the number of past-due loans and lines, although the overall impact has been muted as compared to the first lien market. In Irma-impacted areas, the share of past-due second lien lines of credit increased from July to November by 117 basis points (from 3.2 to 4.4 percent) and second lien loans by 349 basis points (7.2 to 10.7 percent). Increases were also seen in Harvey-affected areas of Texas, with the non-current rate on lines increasing by 79 basis points to 1.9 percent, and by 378 basis points on loans to 11.8 percent. An estimated 17,200 second liens became delinquent as a result of the storm, with 5,000 resulting serious delinquencies. In a market where delinquency rates are relatively low, the rise has been noticeable.
emphasis added 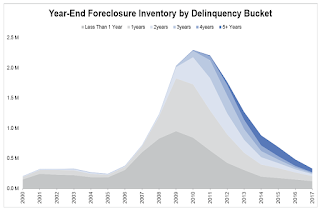 This graph from Black Knight shows the foreclosure inventory by delinquency bucket.  Notice short term is at record lows, but lenders are still working through older loans.


• There are 331K loans in active foreclosure nationwide, down by more than 150K from last year

• Total foreclosure inventory is just 2.0 percent above pre-crisis averages, an excess of approximately 5,600 over what would be expected in a normal market

• In a typical market, this subset of foreclosures would make up the vast majority (93 percent) of active foreclosures

• During the financial crisis, the share of early-stage foreclosures got as low as 45 percent (2014); it currently stands at 65 percent

• Of these, nearly 64K have gone unpaid for five years or more, a number which would typically be fewer than 1,500 nationally