Demographics is a key reason GDP growth has been slow over the last decade.

Changes in demographics are an important determinant of economic growth, and although most people focus on the aging of the "baby boomer" generation, the movement of younger cohorts into the prime working age is another key story. Here is a graph of the prime working age population (25 to 54 years old) from 1948 through January 2018.

Note: This is population, not work force. 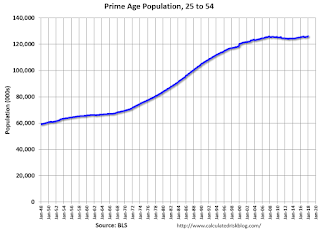 So when we compare economic growth to the '70s, '80s, or '90s we have to remember this difference in demographics (the '60s saw solid economic growth as near-prime age groups increased sharply).

The good news is the prime working age group should grow at 0.5% per year (depending on immigration policies), and this should boost economic activity.