The retail real estate statistics camouflage the changes in the retail sector. Although the vacancy rate was flat for the quarter and the year, new tenants including grocery stores and gyms are taking space formerly occupied by bankrupt businesses such as Kmart. At the same time, some retail space is shutting down entirely or getting converted to other uses. Rent growth has been low but still positive throughout 2017.

New construction of 1.5 million square feet was the lowest level of completions since 2013. Net absorption of 1.9 million square feet was the highest since the first quarter. Asking rents increased 0.5% to $20.85 per square foot. This increase amounts to $0.10 per square foot. The effective rent increased 0.5% as concessions are not as significant in retail real estate as they are in the apartment market. Asking and effective rents have increased 1.8% and 1.9%, respectively, since the fourth quarter of 2016 and less than 4.0% since the end of 2015.
emphasis added 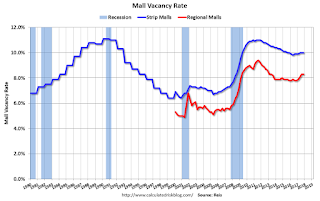 Although unchanged in Q4, recently both the strip mall and regional mall vacancy rates have increased from an already elevated level.