Economic growth continued in January, according to the firms responding to this month’s Manufacturing Business Outlook Survey. The broadest measures of current conditions remained positive this month, although indexes for general activity, new orders, and employment declined from their readings in December. The firms reported higher prices for both inputs and their own manufactured goods this month. The future indexes reflecting expected growth over the next six months remained at high levels, although the indexes fell from their readings in December.
...
The index for current manufacturing activity in the region decreased from a revised reading of 27.9 in December to 22.2 this month. Although now at its lowest reading in five months, the index has stayed within a relatively narrow range over the past eight months ... The current employment index, while still positive, fell 3 points to 16.8. The percentage of firms reporting an increase in employment (24 percent) exceeded the percentage reporting a decrease (8 percent). The firms reported a slight increase in work hours this month: The average workweek index increased 4 points to 16.7.
emphasis added 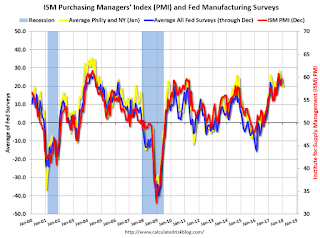